The Telegraph: “Writing saved me after my wife’s death” 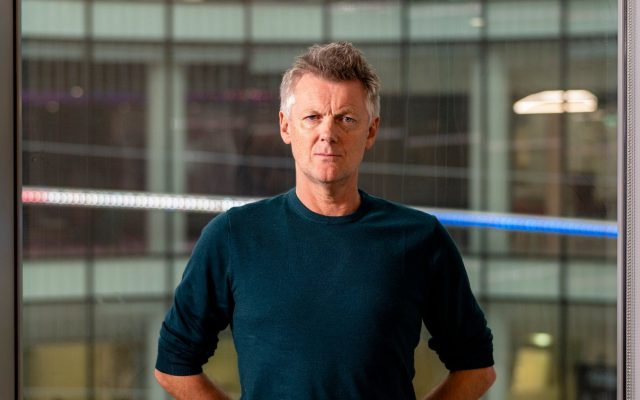 Television drama is dominated by crime – it always has been and it always will be, but writer Chris Lang is doing something different. The 57-year-old has, since the late Nineties, been bringing his own distinctive brand of smart, emotionally sophisticated thrillers such as Torn and A Mother’s Son to TV audiences. What may seem on the surface to be a standard procedural always turns out to be a coruscating study of the human condition: our frailties, our lies, our unfailing accuracy in making the wrong decisions.

Recently, Lang has hit the big time and this year he has produced no less than five shows (three in the UK, two in France) including another series of his most-lauded work, Unforgotten, starring Nicola Walker and Sanjeev Bhaskar as a pair of decent, hard-working detectives unearthing dark deeds from the recent past.

Unforgotten may be Lang’s biggest success but it is also representative of what has gone before. He doesn’t do red herrings or absurd plot contrivances, never maps out weird twists just to prove how clever he is. Mr Mercurio, take note.

“I would never do a left turn that felt out of character because I would feel I was cheating the viewer and I would feel cheapened,” the writer tells me when we meet in the offices of ITV. He attributes much of the success of Unforgotten (which will return for a fourth series) to the performances of his two leads whom he describes as “amazingly empathetic and engaging”.

Lang disagrees with the idea that Unforgotten is sedate. “It’s true that I am not an action guy – I don’t do car crashes or explosions, but I think there is a place for more thoughtful detective drama. I feel more comfortable with a group of characters sitting in a room unpicking how they feel about things. I often look at how I have dealt with life’s vicissitudes and then work it out through my characters.”

Indeed Lang’s past has been marked by one particular tragedy. Eleven years ago, his first wife, Lydia, committed suicide leaving him widowed with three young children. He was in the middle of a job, working for another ITV drama, The Palace. He was offered a pay-off but decided to return to work after two or three weeks. “I would have gone crazy otherwise. On a practical level, working was one of the things that saved my life. But I was also overwhelmed by the kindness of my friends and family and I gained a view of the world that I had not seen before.

“The aftermath of the tragedy was one of the most positive experiences I have ever had – beautiful things came out of it, a great sense of optimism because I felt so loved.”

Nicola Walker and Sanjeev Bhaskar star in Unforgotten
Nicola Walker and Sanjeev Bhaskar star in Unforgotten CREDIT: ITV
He says her death informed his writing. “Having had a fairly gilded life and then the biggest catastrophe happens – well, your life becomes quite fragile and you suddenly realise that there are many people dealing with the same thing every day and you start to understand people. I stopped being so solipsistic, I suppose, and started to see other people’s pain. For the last 10 or 11 years, I’ve been writing about why people are damaged or weak or flawed and trying to have compassion for these things. Unforgotten is saying that we have to be more compassionate because we live in very angry and unforgiving times.”

Lang’s latest drama, Dark Heart (which returns at the end of the month following a pilot in 2016), also showcases his ability for emotional truth. It features a superb, subtle performance from Tom Riley as DI Will Wagstaffe, still haunted by the death of his parents who were murdered when he was a teenager. No one was ever brought to book, and Wagstaffe’s pain manifests itself in a compulsion to push beyond the boundaries of what is considered acceptable policing in order to get results, as if he is trying to compensate for something unresolved. Like Unforgotten, Dark Heart proves that Lang has a wonderful, Dickensian eye for London – its serpentine sprawl and its multitude of rich and varied characters.

“I bloody love London,” he says. “I love the duality of it – you can see the poverty and the wealth, the ancient and the new, the eternal struggle between good and evil. You can see it on the streets, on the cobbles and on the glass.”

Bodyguard star Anjli Mohindra also appears in Dark Heart
Bodyguard star Anjli Mohindra also appears in Dark Heart CREDIT: ITV
Lang lives in the city he adores (with his second wife and his family), and hails from south of the river in Peckham, although he moved to a small market town in Surrey when he was a child. He returned to study at Rada and worked as an actor for several years with only modest success. He mentions an early role in Alan Clarke’s Stars of the Roller State Disco, a 1984 Play for Today set in a dystopian future where youngsters are forced to roller skate ad nauseam until they find gainful employment, a surreal footnote in an otherwise journeyman career.

“I was a mediocre actor,” he says. “The fact is that at Rada, after my first two or three classes I started to look at classmates like Janet McTeer and I realised… F—, she is proper.”

In his early career, he also teamed up with Hugh Grant (they met while appearing together in repertory theatre) to form a comedy troupe, The Jockeys of Norfolk, who enjoyed great success at the Edinburgh Fringe.

Grant, he says, “is naturally funny and left to become Hugh Grant”. Lang went off to become a comedy sketchwriter (while still occasionally acting), working for Smith and Jones and one of Jonathan Ross’s chat shows from which he was eventually sacked. “I was writing s— links and I just wasn’t funny enough,” he says.

He soon cut his teeth on long-running shows such as The Bill. Lang, however, has not dispensed with humour altogether. One of this year’s shows, Plan Cœur, is about an unlucky-in-love female singleton and he currently has a series in development that is autobiographical.

“It’s about what happened after my wife died, when you’re a widower who has a lot of children and you fall in love with someone.”

He is also hoping to write a big state-of-the-nation drama for the BBC, mindful that they can be “proselytising and preachy when not done right”.

“Often they are written by theatre writers who don’t get that narrative is the most important thing. You have to create a cracking story, hold up a mirror and say this is who we are.”

I worry that Lang is spreading himself too thinly and he admits to being “completely bloody knackered”. But he is also very happy.

“I am in a position where I love my job and I feel privileged to do it. I’ve been talking to university students recently and saying: ‘Look, you are 20 and I didn’t get to where I wanted to be until I was in my late 40s. I feel creatively satisfied in a way that I have never felt before – but it has taken me 30 years.”