The Express: “Lest we forget….it’s all about the script”

CHRIS LANG is one of our best and more prolific television writers. It’s no shock to his fans that his current hit, Unforgotten, has beaten Poldark, the BBC’s period drama juggernaut in the latest TV ratings. (from The Express) 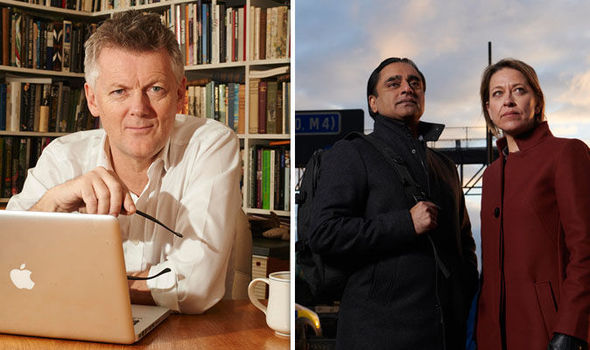 But this writer doesn’t tread water, acknowledging, “I am a bit of an obsessive”.

He also has a new ITV drama, Dark Heart, going out in the autumn, and the fashionable and money-bags streaming channel Netflix has come looking for content.

He obliged them with an idea, which he has worked on with another writer. We should see that next year.

Lang, a Londoner, also knows his way around a police station having learned his trade by writing for the one-time procedural staple The Bill.

But Unforgotten, starring Sanjeev Bhaskar and Nicola Walker, is nothing like that, with a much more elaborate story which occasionally can challenge the viewer.

Lang, 56, has created two detectives in Cassie (Walker) and Sunny (Bhaskar) who are complex, believable and well-rounded. They also happen to be two fine actors.

The secondary characters seem realistic, too, not least Cassie’s father, played by the excellent Peter Egan. His story with his daughter develops more as this series evolves.

We meet in the cavernous stately home near Slough whose interiors double as a police station in Unforgotten.

Lang, as ever, is thoughtful, friendly and always interested in how his dramas are being received.

In a world which laps up crime action in every way, there are very few critical voices of this drama, which has kept the same crew and director from the outset, maintaining a consistent tone and style.

Lang is also one of the best creators of a red herring around. In this series again, they dart and dance around the script.

In front of a group of journalists, he is unapologetic about making this series’ focal point social media and the impact the press can have on crime and investigations.

“Yes, it’s true,” he begins, “I do always have a theme underlying the piece. In terms of characters I wanted to explore the relationships of the four people who have the spotlight thrown on them.

“They are four people who have known each other since school (played by Alex Jennings, Neil Morrissey, Kevin McNally and James Fleet). I have a similar dynamic in my life, four friends I have known for 45 years.

“We’ve been through a lot together. But this set-up feeds directly into the central idea of Unforgotten, ‘How well can you actually know someone?’.

He explains further: “It was a general sense that I think we all had, that we have observed over the last five to 10 years, that media has impacted on the national psyche.

“On there, you get the collective anger of our nation. Social media is often a cause for great good, but also seems to be a platform where people quite often express huge rage.

“I don’t know if this anger always existed, and we now have a public platform for it, or not. It has certainly amplified everything.”

He cites an example that morning on Twitter when he simply expressed sympathy for people caught up in the Hawaiian volcano. “Came the reply, ‘If they live near a volcano, so be it!’. Then people call him an ‘****hole’, then he’s coming back again, and on it goes.

“But I also wanted to explore how the public gaze on an investigation can affect it, and how we are all able to comment on it in what I think is a quite unhelpful way.” (read the full interview at The Express)