‘Unforgotten’ and ‘Innocent’ nearly ready to broadcast after shooting through Covid.

It took months to find ways to shoot productions safely. The plot twist? There will be a shortage of new shows – then a glut

Fresh drama gleams out from the 2021 TV schedules, and viewers, particularly those with access to streaming services, will not go short. But the truth is there will be fewer new shows overall this year: the introduction of Covid safety protocols in 2020 first halted and then slowed down the production of high-end drama.

And while film crews went back to the studios and out on location, many of these dramas will only be ready to air this autumn, when audiences can look forward to something of a bonanza after a drier summer.

“Drama will be thin on the ground at first, then there will be a massive glut, I suspect, as next year was due to be busy anyway,” said executive producer Petra Fried of Clerkenwell Films, which has three shows in development that are due to shoot in the next few months, including Cheaters, a short-form romantic comedy series.

A much-anticipated follow-up to the dramatisation of Sally Rooney’s novel Normal People, a serialisation of her first book, Conversations with Friends, is one of those still en route to screens, but slightly delayed.

Similarly, the makers of Channel 4 drama Murder in the Car Park, Indefinite Films, have complained that the pandemic “made the process weeks longer than it could have been. We had to adapt but it was painful. The delays made it very complicated”.

Many writers and producers say they spent lockdown developing scripts at an intense rate not possible before. As a result, lots of dramas are queuing up to be made, in addition to those already in production when the virus struck.

For Chris Lang, creator of the popular ITV crime series Unforgotten, the past year has been both busy and nerve-wracking. He managed to get both the fourth season – and the second season of another show, Innocent – out filming. “Delays were not as bad as people feared in the end,” he said. “Pre-production and finding a crew was harder though, especially now it feels like everyone is back up and running.”

Lang and his team filmed Unforgotten and Innocent, which he writes with Matthew Arlidge, in September, as something of a leap of faith. “You had to make a commitment weeks in advance because you have to line up your crew and cast. So we were in the vanguard really.

A film set is one of the safest places to be. We all wear masks, rooms are sprayed and we’re tested all the time

“We had already started Unforgotten before lockdown, so we restarted, and we were out in Ireland with Innocent. Line of Duty was also filming up in Northern Ireland, and we both felt we were doing it first. Ireland allowed filming to continue because they put it in a category with building construction.”

Lang had to rewrite, at speed, scenes that had initially involved a large cast. “There were other ways of doing it, I realised, and necessity is the mother of invention. So quite often, the compromises I made ended up working better.

“We had filmed 11 weeks of Unforgotten with Nicola Walker and Sanjeev Bhaskar before we had to stop – and then we did four-and-half weeks in September, but I’d be surprised if you could tell the difference,” said Lang.

While some drama series were able to return to filming with the backing of a big broadcast or streaming network, small independent companies found themselves more exposed. “Everyone in drama now has an insurance story to tell. But in truth, a film set is one of the safest places to be. We all wear masks, rooms are sprayed and we are tested all the time,” said Lang.

Crews, Lang also found, adapted fast to new working rules: “There were a few slow days but after that it was fine. So there should be a lot around by the autumn. I don’t know of anything major that had been ‘green-lit’ that has been cancelled. They were just delayed.”

Petra Fried also feels that social distancing restrictions on set have served to focus the mind. “When we got started again, everyone was incredibly focused and glad to be working again. We found it actually made it more efficient,” she said. “It was just that we had to pause if someone tested positive, and we had three or four instances of that. Day to day. it was OK, although the stop-start nature made things more expensive.”

The biggest challenge now, said Fried, has been finding available film crew for the summer ahead. “Everything is going to be shooting in 2021. There’s lots of good stuff, developed with writers over a whole year, and now ready to go.”

Season Two of “Innocent” began filming in September 2020 at locations in the Lake District and Ireland, with a premiere date yet to be confirmed, but likely to be sometime in 2021.

The new series of Innocent will features new characters, new story and an “extremely twisty plot”, focussing on the plight of a schoolteacher played by Katherine Kelly.

When the finale of ITV thriller Innocent aired in May 2018, it seemed a second series was highly unlikely.

But May 2019, Chris Lang confirmed that the ITV drama had officially been re-commissioned, adding: “And now if you’ll excuse me, Matt Arlidge and I need to get writing!”

Delighted to tell you that #Innocent is returning. New characters, new story, should shoot early next year. And now if you’ll excuse me, @mjarlidge and I need to get writing! #Innocent2 pic.twitter.com/nLbsTHrSD2

The fourth series opens with the discovery of a dismembered body in a scrap metal yard, which the team believe has been stored in a domestic freezer for thirty years. A unique Millwall Football Club tattoo leads to the victim being identified as Matthew Walsh, a young man in his mid-twenties who went missing in March 1990.

The team quickly track the purchase of the freezer to Robert Fogerty, but they are disappointed to learn he’s recently died a lonely, broken man. On looking further into his past, they discover a drink driving conviction on the same night their victim, Matthew Walsh, went missing, and intriguingly there were four passengers in the car with him at the time.

‘The Hook Up Plan’ Season 2 now on Netflix

2020 is shaping up to be a year jam-packed with terrific telly. There are some much-missed returning shows, from Doctor Who to Last Tango in Halifax, plus some cracking running series …

Plus, those TV bigwigs have been cooking up a host of exciting new series and one-offs for us to enjoy. There’s an adaptation of Sally Rooney’s bestseller Normal People, David Tennant’s new Channel 4 series Deadwater Fell, and Keeley Hawes’ return to the force in ITV factual drama Honour.

Alex Jennings has been nominated for a Bafta for his role as Dr Tim Finch in Unforgotten Season 3. One of his rivals for the 2019 Best Supporting Actor award is Ben Wishaw, nominated for his role in A Very British Scandal, in which Alex also starred. The full list of nominees can be seen here. The Virgin Media British Academy Television Awards ceremony will be held at the Royal Festival Hall on Sunday 12 May

Elsa, Jules, Charlotte and Emilie will be back for a second season of the hit Netflix show directed by Noémie Saglio ?

Marc Ruchmann (Jules) posted on Instagram to say that filming will begin next month while Zita Hanrot (Elsa), quant à elle shared a photo of the cast and crew of “Plan Coeur” announcing the new season.

Delighted to announce that on Friday 7th Dec, my new series, an 8 part rom-com called #PlanCoeur starts on @Netflix. It was shot in Paris and is in French but is subtitled in English. Here is the trailer. 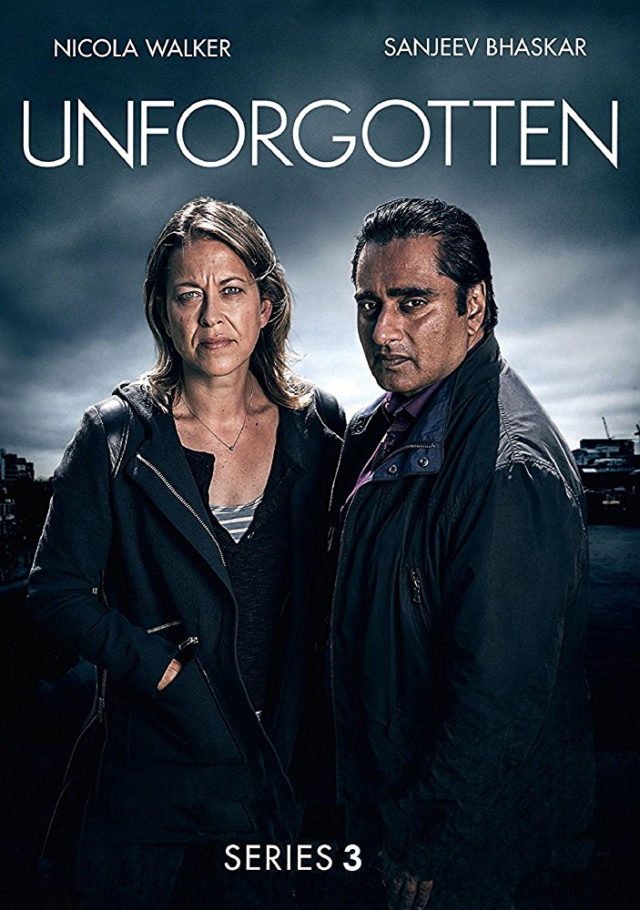 ITV has announced today that critically acclaimed drama, Unforgotten, will return for a fourth series.

The new six-part series will once again be penned by creator Chris Lang (Innocent, Dark Heart) and directed by Andy Wilson (Ripper Street, Endeavour), both of whom have worked on all three of the previous series. Guy de Glanville (Unforgotten, Age Before Beauty) will also return as producer.

“I am so delighted to have been asked to make a fourth series of Unforgotten. The reaction to series 3 was better than I could ever have expected (with more people watching the last episode than any other in all three series) and I cannot wait to discover what lies ahead for Cassie and Sunny, and to create a whole new cast of characters for them to grapple with.”

The commission follows the huge success of the third series which aired on ITV earlier this year. Proving immensely popular with viewers and critics alike, the drama was hailed as “television’s best crime drama” by The Daily Telegraph and “the year’s most addictive thriller” by The Independent Online. The series finale received average consolidated figures of 6.9m and a 28% share.

The new series has been commissioned by ITV’s Head of Drama, Polly Hill, who said:

“We have been delighted with the reception of the first three series of Unforgotten and are thrilled to commission a fourth instalment. Chris Lang’s writing is incredibly powerful and his storytelling utterly compelling, so we have no doubt that the new case will have viewers gripped again.”

‘How good is Unforgotten ….one of our most human and humane cop shows’.
The Observer

‘The dialogue is sparing yet potent, every line earning its keep….compelling TV with no fat on the bone’.
The Times

‘Unforgotten has become the most watchable cop drama on TV….terrifically smart, very moving…no other drama series wears its humanity in such a subtle fashion’. Saturday Telegraph Review

‘The combination of creator Chris Lang’s writing and the beautifully low key performance by Walker and Bhaskar makes this an unalloyed joy to watch.’
The Mail on Sunday

‘..a cut above any other ITV crime drama…the success of Chris Lang’s series is down simply to the superior writing and convincing performances.’
The Times

‘As intelligently plotted and sensitively performed as ever.’
The Sunday Telegraph,

‘Unforgotten is once again superb….it’s beautifully crafted and performed, tight, gripping, but also moving and so very human..there is no better drama on television…’
The Guardian

‘You must watch the new series of this compelling drama….it’s a brilliantly acted slow burn as the case unfolds over six gripping episodes’
The People

“…as compelling as anything we’ve seen on TV this year”