Season Two of “Innocent” began filming in September 2020 at locations in the Lake District and Ireland, with a premiere date yet to be confirmed, but likely to be sometime in 2021.

The new series of Innocent will features new characters, new story and an “extremely twisty plot”, focussing on the plight of a schoolteacher played by Katherine Kelly.

When the finale of ITV thriller Innocent aired in May 2018, it seemed a second series was highly unlikely.

But May 2019, Chris Lang confirmed that the ITV drama had officially been re-commissioned, adding: “And now if you’ll excuse me, Matt Arlidge and I need to get writing!”

Delighted to tell you that #Innocent is returning. New characters, new story, should shoot early next year. And now if you’ll excuse me, @mjarlidge and I need to get writing! #Innocent2 pic.twitter.com/nLbsTHrSD2

The fourth series opens with the discovery of a dismembered body in a scrap metal yard, which the team believe has been stored in a domestic freezer for thirty years. A unique Millwall Football Club tattoo leads to the victim being identified as Matthew Walsh, a young man in his mid-twenties who went missing in March 1990.

The team quickly track the purchase of the freezer to Robert Fogerty, but they are disappointed to learn he’s recently died a lonely, broken man. On looking further into his past, they discover a drink driving conviction on the same night their victim, Matthew Walsh, went missing, and intriguingly there were four passengers in the car with him at the time.

The New York times has included “Unforgotten” as one of the best dramas of the decade. The full list can be seen here.

2020 is shaping up to be a year jam-packed with terrific telly. There are some much-missed returning shows, from Doctor Who to Last Tango in Halifax, plus some cracking running series …

Plus, those TV bigwigs have been cooking up a host of exciting new series and one-offs for us to enjoy. There’s an adaptation of Sally Rooney’s bestseller Normal People, David Tennant’s new Channel 4 series Deadwater Fell, and Keeley Hawes’ return to the force in ITV factual drama Honour.

When writer Chris Lang created the MASTERPIECE Mystery! series Unforgotten, he looked to capture the very ordinary extraordinariness of a modern police force. With a new season on the way, Lang explains what viewers should watch out for as Cassie and Sunny unearth another unidentified body beneath a London roadway construction site.

You can find the Masterpiece Mystery podcast here,.

Alex Jennings has been nominated for a Bafta for his role as Dr Tim Finch in Unforgotten Season 3. One of his rivals for the 2019 Best Supporting Actor award is Ben Wishaw, nominated for his role in A Very British Scandal, in which Alex also starred. The full list of nominees can be seen here. The Virgin Media British Academy Television Awards ceremony will be held at the Royal Festival Hall on Sunday 12 May

Elsa, Jules, Charlotte and Emilie will be back for a second season of the hit Netflix show directed by Noémie Saglio ?

Marc Ruchmann (Jules) posted on Instagram to say that filming will begin next month while Zita Hanrot (Elsa), quant à elle shared a photo of the cast and crew of “Plan Coeur” announcing the new season.

Telegraph, New York Times & other ‘Best of the Year’ lists

The New York Times lists the best television of 2018, with a glowing mention of Nicola Walker in Chris Lang’s Unforgotten:

“Nicola Walker is everywhere in British TV (six-episode seasons help), and she’s always good. She was at the center of each of these series, as a quietly compassionate cold-case cop in the first and as a quietly angry divorce lawyer with her own marital and family issues in the second. “Unforgotten,” created by Chris Lang for ITV, is melancholic and deliberate while “The Split,” created by Abi Morgan for BBC, is biting and fast-paced. Both are intelligent and thoroughly imagined — they’re melodramas with no artificial aftertaste. (“Unforgotten” is streaming on PBS and Amazon; “The Split” is streaming on Sundance Now.)”

The Telegraph: From Derry Girls to Dynasties: the 10 best TV shows of 2018

The third run of writer Chris Lang’s superior police procedural gripped and moved in equal measure. When a long-missing girl’s skeleton was discovered under the central reservation of the M1, cold case detectives Nicola Walker and Sanjeev Bhaskar doggedly traced her murder back to Millennium Eve. Former schoolmates Alex Jennings, Neil Morrissey, Kevin McNally and James Fleet became prime suspects. The killer’s eventual unmasking was one of the year’s most chilling scenes.

The Killing Times Top 20 Crime Dramas Of The Year

The third series of Unforgotten yet again lived up to its name. This most unflashy of police procedurals remained in the memory long after transmission, thanks to creator and writer Chris Lang’s engrossing slow-burn approach of four suspects connected by a collective past and a cold case murder. This time its historical snapshot was Millennium Eve and the death of teenager Hayley Reid.

The superlative pairing of Nicola Walker as DCI Cassie Stuart and Sanjeev Bhaskar as DI Sunny Khan – the most human cops on the box – shone as brightly as ever while their characters’ mettle was tested by four old schoolfriends in a script that transcended most whodunnits.

Not for these two the wise-cracking hyperbole of average cop shows, Unforgotten presents murder not as titillating red-top sensationalism, but in all its social impact, heartache and, yes, even banality. Granted, the couple did come up against their first serial killer, GP Tim Finch (a gripping, glacial turn by Alex Jennings), but who in the real world do we generally trust more than the those in the medical profession? Dr Harold Shipman and nurse Beverley Allitt found similar trust plus opportunity. Series four is on the way – and we can’t wait.

Unforgotten (July 2018, ITV) Chris Lang certainly had his work cut out for him after the show-stopping second series, but the acclaimed writer managed to deliver once more with the crime drama’s third series. This time around, DCI Cassie Stuart (Nicola Walker) and DI Sunil Khan (Sanjeev Bhaskar) are investigating the murder of Hayley Reid, a young girl whose remains are discovered off the M1 motorway. The narrative unfolds over the course of the six episodes, and there are some wonderful twists and turns along the way. As is the case with all of Lang’s work, nothing ever feels contrived or cliché, as his suspects spin a web of lies and deceit. The greatest thing about the third series is how the case impacts Cassie in a way that the previous investigations did not, and her personal struggles end up getting in the way of her work. This is what separates Unforgotten from all of the other crime dramas on television: Cassie and Sunny might be detectives, but Lang never loses sight of the fact that they are first and foremost human beings, which is the reason why we love them so much. Another incredibly strong series for Unforgotten, which only left us craving more.

The best drama series on ITV right now, bar none, Unforgotten returned this year with its most gripping case yet – a six-parter featuring knockout performances from Nicola Walker, Sanjeev Bhaskar, Alex Jennings and the whole cast.

The first series of Unforgotten, as well-received as it was, fell under the radar a bit. It was when the second arrived last year that viewers really had the opportunity to see what they were missing out on. With two spectacular series under its belt – and a Stateside airing on PBS – things could only get better for Unforgotten, which is exactly what happened when the third series premiered back in the summer of this year.

The greatest thing about Unforgotten is how Chris Lang uses his two main characters to explore incredibly relevant issues. In the third series, it’s social media – or more specifically trial-by-social-media – and the dangers that arise because of it that are at the forefront. Additionally, the narrative is exceptionally good (as always), as DCI Cassie Stuart and DI Sunil Khan investigate the murder of Hayley Reid, after her remains are discovered off the M1 motorway.

The fact that Unforgotten is rather formulaic actually benefits the series as opposed to hindering it. The unforgettable twists and turns were as spectacular this time around as they’ve ever been, and the fact that the case personally impacted our detectives aided in differentiating this series from its predecessors. Utterly sublime.

The response to the scripts has been overwhelmingly positive, but many people have asked to see TV pitches and storylines, so here are three pitches, and one storyline.

Delighted to announce that on Friday 7th Dec, my new series, an 8 part rom-com called #PlanCoeur starts on @Netflix. It was shot in Paris and is in French but is subtitled in English. Here is the trailer. 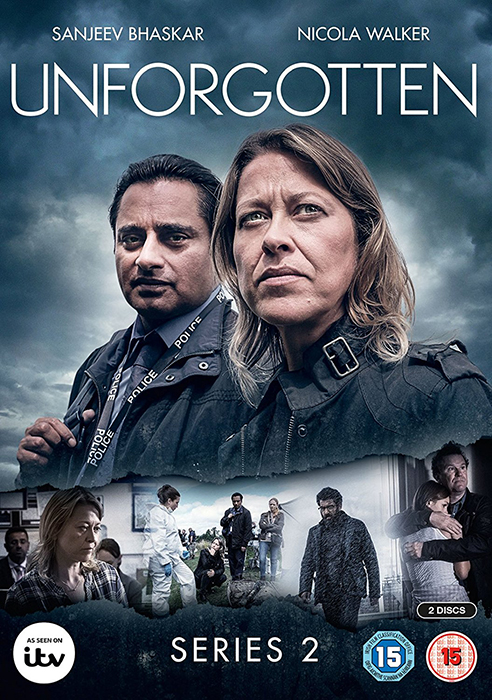